Tablet is the most common solid dosage forms prescribed and accepted worldwide. Although there are various types of tablets available in the market depending upon the size, use and formulation but the basic excipients used in the formulation of tablet are same everywhere.

In simple language, tablet is a solid dosage from comprised of active pharmaceutical ingredient along with several excipients for attaining the desirable biological and pharmaceutical properties. From an estimate, two-third of the prescribed medicines in the world is tablet. Most of the tablets are given through oral route but depending on the need and patient’s concition it can also be given rectally, vaginally, buccally and sub-lingually.
Size and shape of the tablet also vary according to the formulation and need of the patient. Some tablets are just of few millimeters while other go up to 1 centimeter. Also, shape of the tablet can also be either oval, round, capsule shaped etc.


Formulation of the tablet: Different excipients used in the tablet

Beside from the active ingredient, tablet contains various other ingredients like diluents, binder, disintegrant, glidant and lubricant. Chief role of the excilients in the tablet formulation is to impart desirable pharmaceutical and biological properties to the tablet. Here is the detail of the different excipients used in the formulation of the tablet. 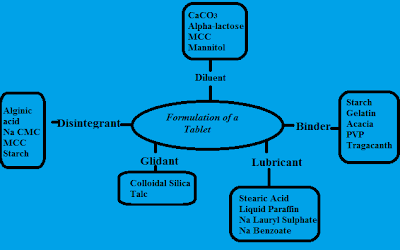 The main role of the diluents in the tablet formulation is to impart bulk to the tablet. Generally, the active ingredient required in a single tablet ranges from 1 mg to 1000 mg. So, it is not possible to make a tablet with such small weight therefore diluent is mixed with the active compound. Major diluents used in the tablet formulation include-
a) CaCO3- Insoluble in water
b) α-Lactose- Most common, inexpensive and inert
c) Mannitol- Used for chewable tablets
d) Microcrystalline cellulose- Increase disntegrant property also

Binders are used to increase the cohesive forces between the ingredients of the tablet so that tablet can be compressed easily. The concentration of the binder should be used carefully as it can greatly influence the properties of the tablet. Binders used in the tablet formulation are:
a) Acacia mucilage (20%) - It gives very hard granules.
b) Gelatin (5-20%)
c) PVP (2-10%) – Used for Non-aqueous granulation
d) Starch (5-10%) - Common binder
e) Tragacanth (20%) – Gives hard granules

Glidants are used to enhance the flow properties of the granules or powders so that granules do not stick with each other. Mainly at present there are only two types of glidants used in the tablet formulation:
a) Colloidal Silica (0.1-0.5%) – Most common and excellent glidant properties
b) Talc (1-2%)

Lubricants are used for the comfortable ejection of the tablet from punching machine without sticking to the die walls. Lubricants used in the tablet formulation include-
a) Stearic acid
b) Liquid Paraffin (5%)
c) Na Benzoate (5%)
d) Na Lauryl sulphate (0.5-5%)

This is an initiative to help our pharma community through spreading the knowledge. We are here committed to provide you high quality study material free of cost. If you also want to be the part of this initiative just like and share our facebook page so that more and more people can be benefited. Here is the link of our FB community: GPATCRACKERS
Posted by A