Introduction to chromatography: Notes for Pharmacy

Chromatography is defined as a separation technique of a mixture, which is based on the interactions of the components with two phases i.e. mobile and stationary phase, as the mixture is allowed to run through a supporting medium.

Further these chromatography techniques can be classified on the basis of the stationary phases used in these techniques:

The overall classification of the chromatography techniques can be summed up as follows:

The theory of the chromatography can be best understood with the following points:


·        It is dependent on the width of the peak.
·        Narrow the peak more efficient will be the technique.
·        Mathematically, efficiency is measured in the terms of the Number of theoretically plates (N),

a.      Eddy’s diffusion: This occurs due to the different path traveled by the solute molecules column.

b.      Mobile phase mass transfer: Mobile phase transfer causes for the broadening of peaks due to the different travel path of the mobile phase when travels through the support material of the column.

The degree of broadening due to the eddy’s diffusion & Mobile phase transfer depends upon:
·        Size of the particles of material.
·        Diffusion rate of the solute.

c.      Stagnant mobile phase mass transfer: Sometimes a mobile phase get stagnated in the support column resulting in the difference in the retention time of the solute and ultimately the broadening of the peaks.

d.      Stationary phase mass transfer: This is attributed due to the different time spend by the solute molecule is stationary phase and the stagnant mobile phase resulting in the broadening of the peak.

e.      Longitudinal diffusion: Broadening of the peak is also attributed due to the diffusion of the solute molecules while travelling through the column.

Van-Deemter equation
It relates the linear velocity/flow rate to the Height equivalent of the theoretical plates (H).
H = A + B/µ +Cµ 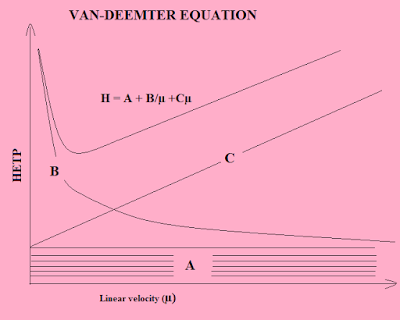 4.      Solute Separation: This Phenomenon is studied with the help of following two factors:
a.      Separation factor (α) : It represents that how well two solutes are separated by any chromatographic technique.
Mathematically,

b.      Resolution (RS): Resolution is given by the following equation:

Where, RS ≥ 1.5, ideal separation
RS ≥ 1, adequate separation
Posted by A No comments: